The Deep Run Wildcats softball team should be forgiven for feeling like they've had to start their 2018 season all over again Tuesday afternoon.

After only playing two games during the first four calendar weeks of the season, and none since March 16th, the Wildcats finally took the field again for a game that mattered at James River, and wasted no time with three first-inning runs. A pitching change and several innings later, the Wildcats were trying to hold on for a win. But a pair of double plays, one which included a play at the plate in the sixth inning, prevented the Rapids from completing a late comeback as Deep Run improved to 2-1 with a 3-2 victory over James River.

"I told the girls to come out today and have fun, because this is the first time we've been out on the field because of the weather in two weeks," noted Deep Run head coach Chuck Wade. "We told them, don't be overanxious, just go out and have fun today. We're going to make plays, we're going to make not so good plays."

Wade ended as a clairvoyant, as the Wildcats made good on the positive proclamation, jumping on James River starter Riley Blaha for three runs in their first at-bat, led by a two-RBI single by Maddie Gutermuth (pictured). The Rapids quickly inserted veteran hurler Jordan Webster to quell the early Deep Run uprising, and they didn't scratch on the scoreboard after that first inning outburst. The Rapids, meanwhile, took awhile to get their bats going, finally breaking up a no-hit bid from Allison Iezzi in the fifth inning.

Led by a Skylar Ackerson infield single, then a Webster single up the middle, and smart base running from the Rapids, they put runners at second and third with nobody out. An error on a grounder by Madison Pierpont allowed Ackerson to score. Courtesy runner Grace Rosemont would come in thanks to another Deep Run fielding error to cut the deficit to a run.

But after Iezzi struck out Blaha, Chloe Rose grounded out to leave two Rapids stranded. In the sixth, with the tying run at third, the Wildcat defense stiffened, as a ground ball to third became a 5-3-2 double play, Hanna Cinella throwing out the runner trying to score at the plate to end the inning. Another double play would wrap up the victory in the seventh.

The Wildcats began a stretch where they would play eighteen games in less than five weeks, a sprint towards the regular season's end and the postseason's beginning. With many players on the squad knowing the rigors of travel ball, while it's not a major burden to handle, Wade says for a team that's already had to deal with the injury bug, it's plenty of burden for now, but nothing his team can't handle.

Deep Run gets #9 Mills Godwin Friday night, then travels to Dinwiddie on Monday, while the Rapids battle Clover Hill on Thursday. 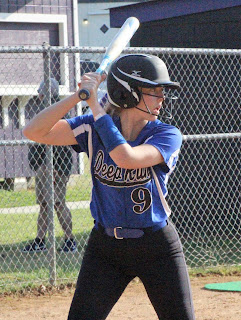 SOCCER: Despite dominating in the offensive zone, especially in the second half, it was defense that helped James River hold up a 1-0 lead, getting a 1-0 win at home over Mills Godwin in a battle of two of the top teams in the area. Meanwhile the Deep Run girls get a pair of goals from Bailey Tran to knock off Cosby 2-0. 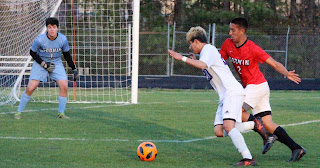 COLLEGE BASEBALL: Joseph Tuzzolo's walk-off hit in the bottom of the ninth gave Randolph-Macon a come from behind 6-5 win Tuesday at home over Virginia Wesleyan, tying the Marlins atop the Old Dominion Athletic Conference (ODAC) at 11-1. The Yellow Jackets, currently ranked sixth nationally in Division III, are 21-3-1 overall, and go to Norfolk to face the Marlins again Thursday afternoon.