We continue our look back at the Top 10 Moments of the season gone by with three events all courtesy of Henrico County teams, two from championships, and one out of nowhere.

#7: RUNNING WILD: J.R. TUCKER VS GLEN ALLEN FOOTBALL: When the season began, no one knew what exactly to expect from football teams in Henrico County west of Hermitage. Deep Run had a playoff appearance from 2016 to build upon, Glen Allen and J.R. Tucker suffered disappointing campaigns that year, while Mills Godwin had a new coach. The Eagles started slowly, while Douglas Freeman stumbled out of the gate. But the back half of the season provided for some pretty wild Friday nights in the West End, from the Deep Run/Douglas Freeman comeback thriller to this November 3rd game that closed the regular season for the Tigers and Jaguars. J.R. Tucker still held out some hope for a postseason berth in Region 5B, and did its part due to a record-setting night by Keyonte Thompson, rushing for a Richmond-area record 467 yards. Glen Allen countered with a team performance just as enthralling, the two teams combining for over 1,100 rushing yards in a 63-56 Tigers win. But when Meadowbrook upset eventual Class 3 state champion Hopewell that same night, it ended their postseason dream.

Suddenly the 2018 season is filled with wonder, and a lot of questions, as to which teams in the West End can break out of the pack and be serious playoff contenders in Region 5B.

#6: JOHNSON'S STATEMENT: Sunday December 10th, Highland Springs had just completed its third straight run to a state championship, defeating Tuscarora 40-27 at Hampton University. The win placed the Springers into the realm of dynasty, which was only a dream five years ago, while L.C. Bird was in the midst of doing the same thing. The most potent, powerful statement from the team came, though, during the postgame press conference, as head coach Loren Johnson made it abundantly clear not only who his Highland Springs Springers are, but what impact that program is making on individual lives, on and off the roster, and throughout their community. Listen to Johnson for the first 2:41 of the conference, as posted on our YouTube Channel, to hear the impact sports can truly have, life changing impact, which Johnson plans to continue this fall as the Springers bear the weight of going for a fourth straight championship. Bearing the responsibility of becoming a man, a productive society contributor, continuing to turn the perception of a community around. These Springers carry much more than three rings on their fingers, and we all should be proud of their efforts.

#5: LACEY'S FACE: Varina boys basketball, over the past four seasons, has been a tale of tenacity and purpose. While rivals like Henrico and L.C. Bird captured headlines, and a state title apiece, the Blue Devils quietly grew their team, following their Blue Devil blueprint, feeling confident it would take them, too, to the promised land. In 2017-18, it did. Varina almost knocked off a Trinity Episcopal squad in the Times-Dispatch Invitational final in a rematch of a game where the Titans blew the Blue Devils out of the Richmond Coliseum the year before. In the calendar year of 2018, Varina built a 22-game winning streak. Expecting a playoff showdown with L.C. Bird, they got, instead, their pesky upset-minded rivals from Highland Springs. Twice. Through it all, head coach Andrew Lacey's mix of youth and experience worked perfectly, down to the championship game, using a second half comeback for a 64-60 win over Wakefield.

When Lacey was given the Class 5 State Championship trophy, a look came on his face that likely mirrored the look he would give as a young child on Christmas morning. Some coaches remain stoic, others smile, but Lacey beamed. His team believed, and now Varina was atop the high school basketball world. Watch the postgame press conference at the video below: 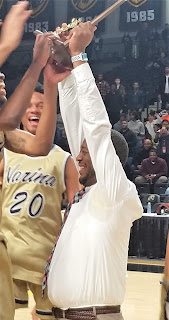 *****
TUESDAY: Our #3 and #4 Moments of the Year, featuring an unbelievable game performance, and, appropriately, a "championship sweep".