We have some changes in light of the first week of the 2016 Holiday Feast of Hoops! See below for how teams have shifted in both the boys and girls polls after the Times-Dispatch Invitational Tournament, the Jaguar Jamboree, and the Hermitage Winter Classic.

NOTES: The impressive work of Trinity Episcopal gives them the nod to rise to #2 for the first time, upending Monacan, though still unbeaten. The Titans get a chance at another holiday title this coming week at Henrico Holiday Hoops (be sure to listen live on The RVA Sports Network!). At holiday tournament time, you can lose a game and still improve your standing depending upon how other teams fare, explaining the rise of John Marshall and Mills Godwin, and, with two recent losses, a slight fall for Varina. But the Blue Devils are still a high-level team. There may have been no one in Virginia who could have beaten Trinity Monday night at the Times-Dispatch Invitational Tournament Championship. Keep an eye on Benedictine, who although just 2-6, nearly knocked off Trinity and can improve that record at their own Capital City Classic this week.

NOTES: Monacan remains unbeaten after another big set of wins out of town, this time winning the Crescom Bank Invitational in Myrtle Beach, South Carolina, while Highland Springs captured their third consecutive T-DIT title. Trinity Episcopal, who was impressive in the T-DIT finals, holds to #3, while St. Catherine's moves up with a third place finish, and so does unbeaten J.R. Tucker, the champions of the first Hermitage Winter Classic. At that tourney, Varina went 2-1 and has put people on notice that they will battle Highland Springs and L.C. Bird in Conference 12. J.R. Tucker, who only achilles heel right now is lack of depth, is, right now, the best team in Conference 11. 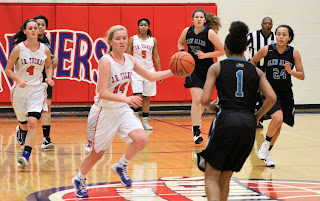