The Collegiate Commissioners Association (CCA) may have taken at least a little of the steam out of the frenzy that is National Signing Day for college football, traditionally on the first Wednesday of February.

Mark your calendars for December 20th, which will mark the first year of the 72-hour early signing period as approved by the CCA. So, area high school football seniors will have the option of signing between December 20 and 22.

The problem with this new period is that the dates coincide with Winter Break. A search of Hanover, Henrico, Chesterfield and Richmond Public Schools' 2017-18 calendars show that jurisdictions are either closed the entire week of December 18 for the first week of Winter Break, while others have school scheduled on December 18 and 19, but are closed beginning December 20.

Thus, schools wouldn't be open to hold "National Signing Day" ceremonies in the early period as designated by the CCA. In time, we'll see if that hinders this new period from becoming a popular choice for seniors to sign on the dotted line.

USA Today reports the new period had been approved by the NCAA Division I Council last month and that the period couldn't officially take effect until approved by the CCA, since they are the organization that actually runs the National Letter of Intent program. (Photo below of 2017 National Signing Day ceremony at Hanover High School last February). 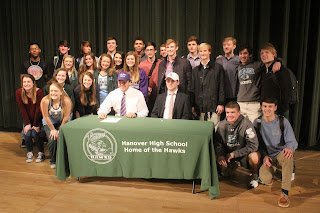