K'Vaughan Pope, the rising senior standout from Dinwiddie, raved about Ohio State and all but said they were his choice in an interview published online in July.

But afterwards, the team said no decision would be forthcoming for awhile. That period ended Friday evening when, before family, friends and teammates in the Dinwiddie High School auditorium, Pope left no doubt his future home.

Pope has committed to Ohio State of the Big Ten Conference, choosing the Buckeyes over Georgia. There were many schools who came calling for the two-way General, who is expected to be a linebacker for head coach Urban Meyer's Buckeyes. But, in the end, Ohio State ran away with the recruiting win.

The usual National Signing Day period for football begins on February 7th, but there is a new "early window" this season, from December 20 to 22. We will see if Pope puts pen to paper prior to Christmas. But first things first. The Generals, who finished 14-1 and fell just short in the 4A State Championship Game last December, begin their quest for their first state title since 2013 on August 25th hosting Denbigh. 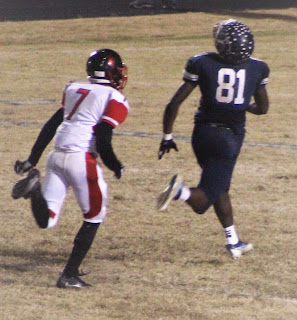 Posted by robwitham at 3:34 PM