So, with everyone trying to understand things like, how many "points" do you get for a win, how many if you lose, and, what is a "VHSL Power Point" or "VHSL Rider Point" anyway, let's break down where we are in each region with four weeks left in the regular season. Some teams will clinch playoff bids Friday with victories, a couple of teams are already in, and many others have a lot of work to do.

WHO'S IN?: (1): Colonial Forge: They are 7-0, and, even if they lost their last three games, they'd finish in the top seven of this eight-team region. Remember, top seed earns a bye out of the first round November 10th, and the eighth place finisher is out.

LOOKING GOOD: (2): Manchester, Thomas Dale: The Lancers head into their showdown with L.C. Bird at 5-1. One more win gets them in for sure. The Knights, at 4-2, need a win at Petersburg plus losses from any combination of Clover Hill, Franklin County and Cosby of at least two teams to pretty much seal the deal.

WORK TO DO: (5): Riverbend, James River, Clover Hill, Franklin County, Cosby: The final four spots are wide open, even for a Titans team currently 1-5. Riverbend and James River, both at 3-4, have the best chances to clinch soon, but the Bears have two tough games coming out of the bye, especially October 27th at North Stafford. James River gets little in bonus points if they beat winless George Wythe Friday, then hosting Cosby on October 27th, either it will be an elimination game for the Titans, or, by then, they may already be eliminated. Clover Hill may have the toughest road left, at Midlothian Friday, then hosting Manchester and finishing at surprising Huguenot.

WHO'S IN?: (2): Hermitage, Highland Springs: An unexpected three-game collapse down the stretch for Hermitage would still leave them in the eight-team postseason region tournament. The Panthers are looking to finish strong, preferably 10-0, to ensure the top seed. The two-time defending champion Springers enjoy a bye this week and look to comfortably make the top eight, but catching Hermitage is a stretch, even if the Panthers lose to Manchester in two weeks.

LOOKING GOOD: (4): L.C. Bird, Lee-Davis, Varina, Henrico: L.C. Bird has a tough battle with the Lancers this Friday. A win would draw the Skyhawks closer to both Hermitage and Highland Springs, while a loss would open the door for teams like Lee-Davis or Varina to become players for the #3 seed that Bird currently occupies. The teams at #4 through #6 all play each other in a round-robin these next three Fridays, with Henrico/Varina this week, Varina/Lee-Davis next week and Lee-Davis/Henrico in two weeks. We'll have a much better idea who could be hosting a first round game as a #4 seed once these three games are played, unless, of course, all three teams exit this at 1-1 against the others. What if L.C. Bird loses to both Manchester and Monacan? Then Lee-Davis and Varina have a shot to finally get into the top three. But that's a lot to ask.

The eye test gives us the following points:

1) Several Colonial District games down the stretch will serve as elimination games, starting Friday on Three Chopt Road. J.R. Tucker hasn't beaten Douglas Freeman since October 1, 2010. But the Rebels are struggling and the Tigers have improved. After Atlee, Freeman has the toughest road to the postseason for two reasons: 1) they still have to play Hermitage, 2) a 5-5 record in the Colonial may not carry enough bonus points on strength of schedule than a Meadowbrook or Prince George would have coming out of the Central.

2) Deep Run has the best track to the postseason. They spend all of October at home, then go to Mills Godwin November 3rd in a game where the Eagles may have already been eliminated. But lest we forget, Thomas Jefferson comes in Friday, a team that is 2-1 in their last three games against the Wildcats, coming off a 55-point performance in a home win over Glen Allen, and the Vikings are fighting for home-field advantage in Region 3B.

3) Note Central District teams, Prince George and Meadowbrook. If the Monarchs defeat Matoaca, Petersburg and Hopewell (assuming they lose to unbeaten Dinwiddie Friday), it will be hard to keep a 6-4 Meadowbrook team out because their rugged strength of schedule earns them gobs of bonus points. Remember, if you lost to, say, Highland Springs, you get an extra point for each of their victories. The eye test here says Prince George might need 6-4, but there's a small path for Meadowbrook to grab the #8 seed at 5-5.

4) Atlee On The Brink: The Raiders have to pull some upsets in order to really be in the playoff discussion in two weeks. A loss Friday to Lee-Davis makes them 2-5 with a trip to Highland Springs next on the schedule. No one will make the playoffs in Region 5B at 4-6 or worse. Why? There are too many teams ahead that should finish no worse than 6-4 or 5-5.

BY A THREAD: (2): Matoaca, Glen Allen: For the Warriors and Jaguars, it's simple. They must win out, finish 5-5, and likely get some help, like John Marshall beating a couple of Colonial District teams. Matoaca, at least, has some destiny in their hands, as they have Prince George and Meadowbrook coming up. Beat Colonial Heights Friday, win the next two, and they have something to play for November 3rd when they host Petersburg.

WHO'S IN? (1): Eastern View: The reason why Eastern View stands alone is they've already played seven games, and they are 7-0. Even if they finish 7-3, they'll stay in the top eight.

LOOKING GOOD (3): Dinwiddie, Monacan, Louisa: Each of these teams are currently 6-0, and with wins on Friday, they'll all be bumped up to "Who's In?" status. Region 4B has become insanely top heavy. It's possible that all four remaining unbeatens could finish 10-0 as each play in different districts. If they all won their home games in the first round, on November 17th we could have two 11-0 teams playing each other at two different games, both for the right to get to the inaugural Region 4B Championship Game.

WORK TO DO (9): Patrick Henry, Huguenot, Midlothian, Courtland, Hanover, King George, Caroline, Powhatan, Chancellor): Now it gets tricky. After the top four, no one has a winning record. Only Patrick Henry and Midlothian are at .500 at 3-3. Huguenot (currently in), King George and Chancellor (both currently out) all have seven games behind them, meaning one less opportunity to win and collect points. Midlothian gets three out of their last four at home, having to go to Cosby October 20th. Monacan will be tough, and their finisher against James River, a big rival, may be a game where the Rapids need a win for better postseason position. Huguenot, after this week's bye, gets George Wythe, Clover Hill and Monacan. Get two wins and that could be enough. Finish 4-6, and it's shaky. Patrick Henry really needs a win over Hanover Friday, one to keep the Hawks from battling back into the picture, two to get some much needed momentum down the stretch with games against Highland Springs and Lee-Davis still to come.

Chancellor and Powhatan have the toughest roads. Unless a lower team gets on a run, the final four bids are Patrick Henry, Huguenot, Midlothian and Courtland's to lose, with Hanover and King George seriously close should someone slip and either can string together a few wins. 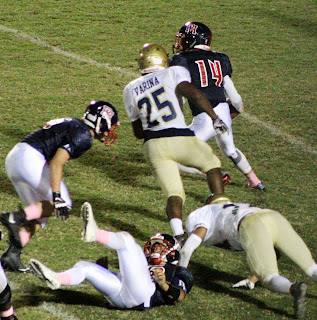 Posted by robwitham at 9:03 PM