Hundreds of thousands of people proudly call various jurisdictions around the Richmond area their "home", but few do it the way residents of one county do.

In Prince George County, whether near the courthouse, out in Disputanta, near Garysville, or closer to Carson, generations have come through the county's lone high school, proud to be called a Royal.

This decade, they've seen their neighbors to the west, Dinwiddie, become, and remain, a football power. They've watched nearby rival Hopewell succeed in basketball, in football, and this year, capturing the school's first ever region baseball title.

You'll pardon Prince George if they were a bit busy to notice. They weren't being rude, as Royals fans were too busy watching both their baseball and softball teams work to make history.

And Saturday, within a half-hour of each other at two Henrico County high school campuses separated by just a few miles, the Royals and their faithful fans not only celebrated one, but two first-time state championships, as Prince George baseball used a sterling pitching performance from Buck Forbes, a complete game one-hitter, to shut out Potomac 8-0 to win the Class 5 State Baseball Championship at Deep Run High School, while, at Glen Allen, the dream also finally came true for a group of hard working, dedicated young ladies who showed complete trust in each other.

In the Abernethy household, softball has been long a family mainstay. In 2014, Casey Abernethy was a junior for Prince George as they reached the former Group 5A State Semifinals, only to be turned back by eventual champion Great Bridge. Two years later, while Casey settled in to her freshman season at Randolph-Macon College, younger sister Caitlin was contributing for the Royals as they advanced to the 5A South Region Semifinal, a win away from a return to the state tournament.

But it would be Lee-Davis who, by a razor-thin margin, ended the Royals hopes that late May night in 2016, also at Deep Run High School. Abernethy the younger was part of a talented sophomore class that took the lessons of that loss to heart, returned to the region playoffs a year later, only to be bounced in an upset by Glen Allen.

There was one season, one chance left for this senior class. And, from Laura Thompson in the circle to Sarah Thompson at short, Haley Godfrey at third base, Alyssa Swords behind the plate, and Abernethy, patrolling center field, just to name a few, the Royals began this season filled with confidence, aiming for one thing. They wanted to finally seize that elusive state championship, for themselves, the senior class, the coaching staff, and, for Prince George.

They went to three-time defending state champion Atlee in the first week of the season and shut them out 3-0. A month later, they welcomed Lee-Davis to their field and outplayed them for a 7-1 win. They went undefeated through the regular season.

And, while Caitlin was focused on the Royals' success, Casey was busy contributing to the best season in Randolph-Macon history, a 40-7 campaign which saw a third trip to the NCAA Tournament in the last four years.

The calendar turned to June, and the Royals suffered what would be their lone setback of the year, falling 2-1 to, of course, Lee-Davis, in the Region 5B Championship. But after both the Royals and Confederates won state quarterfinal games, it was time for the rubber match on Friday at Glen Allen High School, in another twist of irony.

For Prince George, to finally make the championship game, would have to beat the team that eliminated them in 2016 on the home field of the team that ended their season in 2017. After six scoreless innings, three well-placed hits, using both the left and right field lines, gave the Royals a 4-0 lead, which would be the margin of victory.

The championship game, thanks to early Brooke Point nerves and a big extra base hit from Madi Quesenberry, almost became an afterthought thanks to a seven-run first inning. Then it was a case of keeping your focus on the game, not getting overconfident. And despite a less than Laura Thompson-like outing from Thompson, the Royals cruised to the 11-4 win and, finally, that state championship they had dreamed of for so long.

Caitlin leapt for joy, racing from center field to join the dog pile. Casey and her family celebrated just on the other side of the fence. And, in a sense, the dog pile included Casey, Brendal Vargo, and the many other Prince George Royals of the past whose contributions laid the foundation for this senior-laden squad to be high enough, and prepared enough, to grab the brass ring.

As the trophy presentation began, when the public address announcer said, "...with a record of 23-1, the Class 5 State Champions, the Prince George Royals...", the tears flowed from Caitlin. And she knows exactly why she was in that position on Saturday.

"I've always looked up to my sister as a player," Caitlin said of Casey. "She's really inspired me to work hard. And I saw her go to states, so I just wanted to follow in her footsteps and make her so proud, because she's my inspiration, and my best friend."

It's a bond sealed by blood, but galvanized by the dirt, grass, and grit of a softball field. Casey couldn't be more proud.

"She's always played with us, been with us. I just always thought she's been able to hang with the older girls, and finally she was able to come up with the big win when we always came up short, so I think it's pretty awesome," Casey said. "My dad watched his last Prince George High School softball game today with a daughter on the field, so it's been a long time coming and I'm glad she was able to finish it out with her team."

The bonds of family, and of community. When in doubt, Laura Thompson could always turn around, and see Sarah at shortstop before reaching for the rosin. Kyla Nase at first could count on Brooke Loving at second, and vice versa. The roots, the relationships, count blood relatives as well as friends who now feel like sisters.

And an entire county, not just a community, celebrates the accomplishments of their homegrown young men and women, who turned Saturday, June 9, 2018 into a day Prince George County will never forget.

Next for the Abernethy sisters is, for a year, a sibling rivalry. Casey is preparing for her senior year as a Yellow Jacket, while Caitlin is preparing to join the Christopher Newport softball program. So, when they face off next spring, who wins?

They may be on opposite sides one day months from now, but the Abernethys, Caitlin's 2018 teammates, and every player ever to put on a Prince George softball uniform owned a piece of the trophy that, finally, found its way back down I-295, then to Laurel Spring Road, where it would find good company: the 2018 Class 5 Baseball State Championship trophy, too. 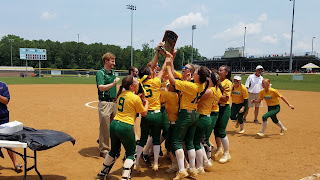 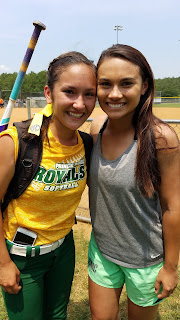