Week 8 produced some significant changes in several regions as the new Virginia High School League (VHSL) Rider Point standings are released Monday afternoon. They are listed below with a synopsis of each region.

Coming Tuesday afternoon, Rob Witham will have the most in-depth analysis of each region, and each team in RVA fighting for the postseason on a new edition of our "Central Region Now!" podcast, exclusively from RVA Sports Network.

NOTES: The Lancers lose almost half a point, as Colonial Forge's win over CD Hylton was enough to send them to first place with three weeks left, but, Forge only has two games left, this Friday at home to Woodbridge, and at Freedom-PW November 4th. A Manchester win over Monacan next Friday could return them to the top spot. Overall in 6A South, Oscar Smith leads by 1.3 points over Colonial Forge, with Cox next, then Manchester. Thomas Dale holds steady at fourth position even by gaining a point. Riverbend's win over Freedom-PW was huge, vaulting them from fifth to third. And, here we go again! Friday's James River at Cosby matchup will have significant playoff implications. The loser could fall below CD Hylton, even though they have a bye, depending upon how many rider points they earn on the sidelines by teams they have defeated. A Forest Park upset of Freedom-PW changes everything in the bottom half. If Woodbridge shocks Colonial Forge, all bets are off.

NOTES: Look for L.C. Bird's lead, which grew from 1.3 points to 2 points this week, to shrink even with a win over one-win George Wythe. Hermitage gets a four-win Mills Godwin, Highland Springs gets 5-2 Henrico, and Douglas Freeman gets a Deep Run team suddenly 4-3. The past two years, this game hurt the Rebels, as the Wildcats weren't nearly as successful. In fact, Deep Run harbors hopes of an upset which would vault them into the race with two weeks to go. The Eagles harbor the same hopes to knock off the Panthers. Overall in 5A South, the Skyhawks are tied with Hampton at #1, Salem-Virginia Beach is third, over one-half point ahead of Hermitage. It is Varina's turn to face winless Armstrong in the Capital this week, which gives Matoaca a chance to rise with a win over a 5-2 Hopewell squad. Lee-Davis usually gets a shot at big points with a win over Hanover, but this year, the Hawks are 1-6. The Confederates need Hermitage, Douglas Freeman, and Thomas Dale to win, and they wouldn't mind a Hopewell win over Matoaca and a Highland Springs win over Henrico to position Lee-Davis to grab big points the final two weeks, hosting Henrico, then heading to Patrick Henry for The Tomato Bowl. Prince George must win at Petersburg to stay in the conversation next week, and Meadowbrook's fate is almost as tenuous, though their strength of schedule will help them have a prayer even with a loss to Thomas Dale Friday.

5A NORTH (Top 16 teams qualify, all conferences in)

NOTES: Atlee returns to the top sixteen thanks to the Homecoming Miracle of 2016, beating Henrico. The Raiders would love Henrico to beat Highland Springs, which would give them a critical bonus rider point. It's beginning to look like the one team outside the top sixteen with the best chance of getting back in, and ruining someone's season, is J.E.B. Stuart, but they face a tall task Friday hosting Potomac Falls. For Patrick Henry, a win over winless Armstrong hurts, as the strength of schedule up north is now flexing its muscle, with teams like Massaponax, Potomac Falls and North Stafford distancing themselves, making it harder for the Patriots to finish in the top eight. A Powhatan win over Albemarle, and a struggling Potomac beating North Stafford helps Patrick Henry if they can beat Atlee. If Potomac wins and Atlee loses, bad news for the Raiders. Patrick Henry last hosted a playoff game in 2001. Their last eight playoff games, dating back to the 2001 Group AAA State Semifinals, have been on the road.

NOTES: Dinwiddie finally gets the top spot thanks to Western Albemarle's upset of Louisa, who only drop to third. Monacan gains over a half-point but fall two places, with the Chiefs beating a one-win George Wythe team while Chancellor defeated a five-win James Monroe team and Powhatan defeated a four-win Charlottesville squad. Dinwiddie is favored against Colonial Heights this Friday and Petersburg next Friday, then have to go to Meadowbrook November 4th in a game where the Monarchs could be playing for their playoff lives. Eastern View has their last road game Friday, at Liberty-Bealton (3-4), hoping the Generals will slip somewhere. King George can permanently separate themselves from Courtland for at least the seventh seed when they meet each other Friday. Midlothian hopes for a titanic upset of Monacan, which should take them over Courtland, unless they upset King George. Huguenot's comeback win over Clover Hill draws them almost even with Midlothian, and not out of the conversation, but their schedule is unfavorable with a bye, L.C. Bird, then 1-6 George Wythe to finish the season.

NOTES: Hopewell cuts Brentsville's advantage at the top almost in half to under a point with three weeks to go. A Blue Devils win at Matoaca, even with a Brentsville win over two-win Kettle Run, could shave that advantage down even further. James Monroe's loss Friday strengthens Hopewell's position in second place, gaining over a point. Thomas Jefferson drops a spot from fourth (a home game in round one) to fifth (a road game). They go to Glen Allen, but at a bad time, as the Jaguars will have momentum finally coming off their first win of the season. Petersburg can possibly move up with a home win over Prince George, plus, they need to end their five-game winning streak. Spotsylvania overtakes John Marshall for ninth as John Marshall's playoff hopes begin to fade.


ADDITIONAL NOTES: In 2A East, Goochland is now #2 at 22.571 points, behind Stuarts Draft (23.143). Both teams, for #VHSL purposes, are 7-0. Goochland's win over Fork Union earlier this year does not count in the standings since Fork Union is a VISAA school.

King William, now 4-3, has risen to 11th in 2A East at 16.714 points, just two points out of eighth place. The top eight teams in 2A East host first round games, as the region is a 16-team "all in" bracket regardless of conference. Amelia is tied for 14th with Robert E. Lee/Staunton at 16.143 points. 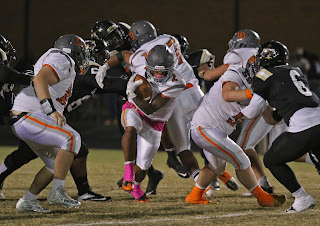 Posted by robwitham at 1:48 PM