(NOTE: This is the third and final article in a special series on student-athletes and mental health issues as presented in partnership by The Hanover Herald-Progress and The RVA Sports Network. Other articles can be found by scrolling down our website.)


Walking into the home of the Cameron K. Gallagher Foundation, a former bank branch behind the Gayton Crossing Shopping Center in Western Henrico County, you immediately feel warmth and openness. Desks aren't partitioned, and, within minutes, the "office" can be transformed to an open area to host dozens of teenagers for a variety of events.

It is but one of many ways that the foundation reflects the spirit and character of its namesake, a beautiful, shining young woman who valiantly fought her own battle against depression, prepared to fight back, then left us all too soon.

*****
It is March 16, 2014. Sixteen year old Cameron Gallagher is ready to run her first-ever half marathon with her friend Abby Donelson. Known for her swimming prowess, the Shamrock Half Marathon in Virginia Beach was a new experience for Cameron, a sophomore at Douglas Freeman High School.

"She did not like running, until she started training for the half marathon," recalled Grace Gallagher, Cameron's mother. "It was kind of funny, because swimmers don't make good runners sometimes, so when she came to us saying she wanted to run this half marathon, we knew this was out of her comfort zone. She knew she would have to plan, train, that it was a real goal she was going to meet."

There was much more than competitive swimming and a decision to run in Cameron's life. Daily, she faced the struggle of depression. Signs of that struggle had already become evident to Grace, and her husband David, Cameron's father.

"We had been pretty in tune to a lot of her anxiety for a few years. It became very dark, and you could see the strain in her face, the muscles in her face were just always tight," Grace said. Coupled with signs that Cameron had attempted to harm herself, the parents made the very difficult decision to hospitalize her in the summer of 2013.

"It was something where we had to make sure she would be safe," Grace noted. "As much as we were right there with her, there comes to a point where you don't want to make that choice, but you know you have to."

Along that line, after Cameron had a fainting episode, her parents took her to a pediatric cardiologist for preliminary testing to make sure her heart was fine. No issues were found. Grace and David had no idea that, come March 16, 2014, keeping Cameron safe would become an issue they could no longer control.

*****
Cameron and Abby ran the race together, crossing the finish line together in two hours, nineteen minutes. Her father told "Runners World" in 2014 that during the race, "it was the happiest I'd ever seen her".

Shortly after crossing the finish line with Abby, they hugged, then Cameron collapsed. Attempts to revive her were unsuccessful, and she passed away at a nearby hospital. The medical examiner's report showed she suffered from cardiac arrthythmia, an abnormal heart rhythm where electrical impulses are irregular. Fatigue and dehydration exacerbated the situation, according to the report.

After fighting the battle of mental illness for so long with their eldest daughter, the second of five children, an undiscovered physical issue ended her brief stay on earth. The Gallaghers were left to grieve, to support each other, and, thanks to a final message from Cameron, ensure that her life's race was not run in vain.

*****
Cameron once approached her parents about creating a 5K race of her own to raise awareness of teenage depression and mental illness.

"Our first reaction to her was, well, you're failing English," Grace remembered. "That's a great idea, and we'd love to help you with it, but you really need to concentrate on getting your grades up."

After her death, however, a trip into Cameron's room, described by Grace as a "disaster", yielded a marvelous discovery. It was a folder, "organized perfectly", that contained everything from a speech sharing her story, to letters for everyone ranging from potential sponsors to her doctor, asking for support for her race dream.

"When we found the plans, it was as if she'd left this present, and the present was not for us," Grace recalled. "We were the soldiers to deliver the present. The present was how she knew, first hand, how many kids were just like her, how many sixteen year olds were out there struggling every day, how she could see it in their eyes, how she knew when it was happening."

While still overcoming their initial grief, while continuing to ask why Cameron couldn't be there to see her plans through herself, Grace and David became her soldiers for this purpose.

The SpeakUp5K, named by Cameron herself, began with a launch party two months after her passing. Over ten thousand people participated. The first SpeakUp5K Race in Richmond that September welcomed 3,500 racers. Today, there are SpeakUp5K races in San Diego, California and Tampa, Florida.

There is also the Cameron K. Gallagher Foundation, which does far more than facilitate the racing events. The foundation provides free mental health programs for teens, workshops and curricula, while working in several area high schools with hopes to add to their list of partners.

While the Foundation works tirelessly to carry on Cameron's mission, it is also therapeutic for a family who continues, almost three years later, to deal with an empty seat at their table.

*******
"I think I would be doing everyone a disservice if I stood out there and said, this is all amazing, all so wonderful," Grace said. "The reality is, it's not all so wonderful. It's a struggle. For all those people who wake up every day and say I don't know if I can get out of bed, I get it. I still find myself in my closet, breathing, telling myself, you can do this, put one foot in front of the other, you can do this."

Cameron's mother is very open about the fact that there is still anger and worry for her and her family, as she and David deal with the helping Cameron's older brother Andrew, and younger siblings Reilly, Sydney and Mitchell in their daily battle of coping with life without Cameron.

"I'm still scared, I'm still in pain," Grace noted. "But what Cameron decided to tell me what to do with that was you can have all that. It's yours, you hold on to that. But what is more important is that there are people out there that need to know you are still in pain. They need to know that they're not alone. You need to tell my story because if we don't, and we're not honest with it, we're going to keep losing these beautiful, beautiful children, losing their battle to their illness. They need to know they're worth it. Your pain will be worth it."

This foundation is different, in that it will not provide vague hope, or hope that cannot be realized, offering instead a hope that understands the highest peaks and darkest valleys, offering to be there at each moment.

Keeping that realistic balance, in part, is because of the voices of Andrew, now a young adult, and Reilly, Cameron's closest sister in age, now in high school herself.

"Both, very publicly, have been able to put their very real, very raw feelings out there, which help so many families that are having those feelings," Grace said, noting Cameron's siblings struggled with not being able to help her during her depression battles.

"To go from knowing your sister is struggling so bad, and wanting to say, we love you, you need to stop this, why isn't my love enough, why are we not enough for you? That's hard to grasp, and then to lose her and feel like, oh, my gosh, I didn't do enough for her. There's so many questions and so much guilt that they didn't need to have, but they had it, so you can't act like it's not there because you know they didn't need to have it," Grace said.

*******
Any family who has dealt with depression, suicide, or other psychological issues knows the effects are as far reaching as possible. The Cameron K. Gallagher Foundation continues to work to provide avenues to meet challenges head on for those who suffer, and for those who love the suffering.

"Families think it's not okay to have these feelings. Are you kidding me? It's perfectly normal to have them," Grace noted bravely. "Love doesn't just look like roses. That's not real love. Real love is the grit of it all, and the grit doesn't always look pretty, like a rose."

Cameron Kathleen Gallagher's rose did not fade away on March 16, 2014. Its long, far-reaching, and most beautiful bloom had only just begun.

For more information on the Cameron K. Gallagher Foundation, services provided, the SpeakUp5K race series, or how you can help with the Foundation's efforts, go to www.ckgfoundation.org. 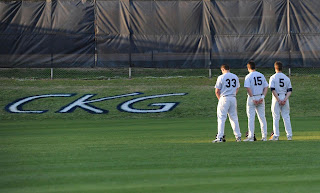 (Douglas Freeman baseball players pause in memory of Cameron Gallagher before the start of their game in April 2014.  Many of the players knew Cameron personally and demonstrated their support of her cause during this moment of reflection. Photo Courtesy of CKG Foundation.)
Posted by robwitham at 3:52 PM