There may never have been a more important game played, in any sport, in what old-timers still call "the new gym" at Patrick Henry High School than the one last November when the Patriots hosted Maury in the 5A State Boys Volleyball Semifinals.

Everyone expected a close match, but it ended up being an absolute classic, and a night where "Patriot Pride" showed like never before inside that facility.

You must remember, the Patriots had finally beaten their county rival, Atlee, to give them home-court advantage in the state semifinal round. Atlee, at the same time on the same evening, was battling defending champion Princess Anne in Virginia Beach.

Maury won a competitive first set. The Patriots, in the middle of a postseason run few saw coming, regrouped and won the next two sets 25-22 and 25-19. Patrick Henry fans were building towards a frenzy never seen in this gym, and, even though the Commodores took the fourth set to force the tiebreaker, at times, the court became deafening.

Perhaps the peak of excitement came when Patrick Henry opened set five on a 9-3 run. From there, it was stay cool, prevent a Maury run, and make the dream of playing at Siegel Center a reality. When match point (X8) was over, the scoreboard read 15-6, and after the usual postgame handshakes and congratulations, the players and student body celebrated a return to the state stage for boys volleyball, their first in fifteen years.

Some statistics from that night? 50 assists for Adam Lane, 16 kills and 14 digs for Jarrett Carrano, and Connor Logan with 21 digs, just to name a few.

The performance and the electricity in the gym that evening, coupled with the historic nature of the victory, makes Patrick Henry's state semifinal win our #6 Game of 2016-17. 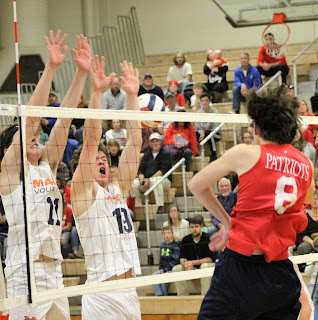 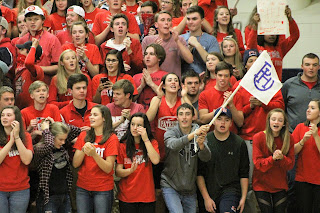 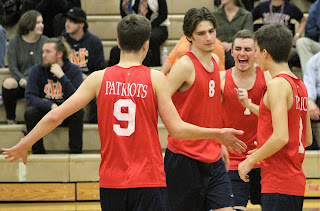 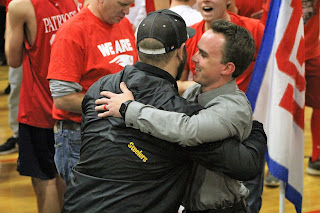 Posted by robwitham at 9:01 AM