Hopewell head girls basketball head coach Jackie Edmonds knew all about Spotswood junior center Stephanie Ouderkirk, having seen her on the AAU circuit. Thursday afternoon at the Siegel Center, Edmonds saw a ton of Ouderkirk, who scored 24 points, sometimes at will, in leading the Trailblazers to a 66-56 win over the Blue Devils, ending Hopewell's season as Class 3 state runner-up for the second consecutive year.

"When Stephanie touches the ball, she knows when to drive, when to kick, and then her other players stepped up," Edmonds said after the loss.

Ouderkirk, who holds several Division I offers, went 10-of-17 from the floor, making 7-of-10 at the free throw line, while finishing with 13 rebounds. But it was the rest of the Blazers who contributed mightily to a fourth quarter performance for the ages, outscoring Hopewell 22-12 in the final stanza, and holding the Blue Devils to just two points in the first 4:42, deftly, and simultaneously, building a lead and bleeding out the clock.

The senior laden Blue Devils (24-3) were led by Tyjana Simmons, who scored 20 points, and Courtney Scott, who added 16 points and eight rebounds. Messiah Hunter, tasked most of the game with trying to slow down Ouderkirk, scored eight points, had eight rebounds, but was not a major factor in the contest.

The biggest difference in the fourth period was simply shot selection. Hopewell hurried shots at times, seeing their deficit growing, and sometimes the selections were poor. At other times, they were made to look poor by a Blazer defense that didn't let up until the final seconds. The Blue Devils shot 29.4% from the floor in the final stanza, while Spotswood shot 71.4%, and made 12 of their 14 fourth period free throw attempts.

Hunter and Ariel Green, who scored three points and added six boards, will return to form the nucleus of the future of Hopewell girls basketball. Edmonds, though disappointed with the result, could not be prouder of the group of ladies she brought to the game's biggest stage, especially considering their relentless style of pressure defense utilized by a team that normally, and again today, ran with only a six-player active rotation.

"I felt really good about this game," Edmonds noted. "I felt like we were a little bit closer to winning a championship today. We were even with them until the fourth quarter. Those six girls that played were the ones who came out in September. I'm very proud of them. It's no fun getting in the gym, but we do it six days a week."

The returning Blue Devils will have even more fuel and motivation to get back into the gym once next season rolls around. 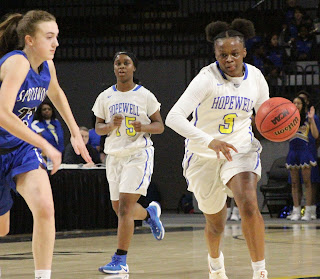 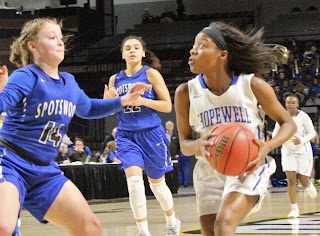 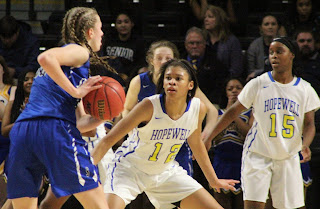