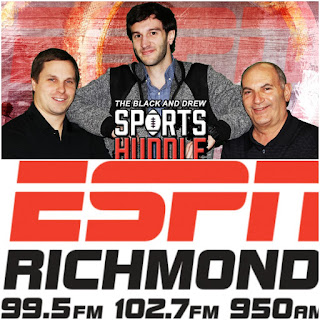 Patrick Henry's offense was very impressive, scoring 43 points in the first half of a 56-6 win over overmatched Spotsylvania last Friday in the opening round. Now, the Patriots step up, big time, going into #TheJungle to face a Louisa squad that, since the opening of the 2017 season, has won 36 of 38 games. There was a time where Patrick Henry put up those kind of numbers, but that was 20 years ago. Patriots head coach Ken Wakefield will work hard to keep the focus of his team on what happens within the field of play only, and not worry about the crowd, or the atmosphere. Playing disciplined football is critical if Patrick Henry wants to pull the upset. Forcing a couple of turnovers wouldn't hurt.

#7 Dinwiddie (6-5) at #3 Eastern View (10-1), 7pm: The most dangerous #7 seed in Virginia? You bet. Just ask Monacan, who was controlled last week by the Generals in the first round as Robert Barlow went off for nearly 300 rushing yards and seven (yes, seven) touchdowns. NBC12's Marc Davis puts it best coming up Friday on the "On The Sidelines Pregame" on the Game of The Week: Dinwiddie is playing with house money. With a difficult regular season schedule, if they are able to peak over the next few weeks, a deep run is possible. But the Cyclones are the defending region champions for a reason, and it is a long bus ride from Dinwiddie to Culpeper.

#4 Varina (9-2) vs. #1 Highland Springs (11-0), 7pm, Hermitage HS: If you're Varina, you're thinking, it has to end at some point, right? The Springers can't keep winning forever, so, why not make it happen tonight? The Blue Devils did their best to end the Springers' now 40-game winning streak in the regular season finale a week ago Saturday. Now, Varina gets another shot. What did they learn from last time? Perhaps more importantly, what did Highland Springs learn? Lest we forget they get to adjust off the first meeting, too. One important note about the Springers: any team that has a 40-game winning streak (and a 21-game winning streak in the postseason) has found a myriad of ways to win. They also truly believe they are going to win any game. Note we didn't say they thought they had a chance to win, the Springers believe they will win. That's how you score 26 unanswered points at Manchester after being down 16-0 midway through the third quarter. Don't be surprised if, again, the Highland Springs defense needs a late stop to seal another trip to a region championship game.

#3 Deep Run (11-0) at #2 Manchester (10-1), 7pm: These schools have never met in football, Deep Run having begun play back in 2003. The Wildcats have been on a journey this season where they've been looking for a game where they could make a statement, separate themselves from the rest of their rivals in the West End of Henrico, and prove they belong with the Manchesters, Varinas and Highland Springs'. That game is here. As for Manchester, it's a game where they, too, look for a measure of respect, the new breed of Lancers wanting to prove last year's 15-0 Class 6 state champions weren't a one-off. This game will be worth the price of admission to watch the battle between Garcia and Kite. But the defense that plays the best will move on.

#3 Thomas Dale (8-3) at #2 Ocean Lakes (8-3), 7pm: A fully healthy Knights squad, as we've believed since watching their scrimmage against Highland Springs in August, can go a long, long way in Class 6. This will be a tough test, but the Dolphins are not the strongest #2 seed. Thomas Dale can win with a time of possession advantage, eliminating turnovers, and, most importantly, their best defensive effort of the season. We haven't seen them hit "Dark Zone" level in a long time. From now on, they'll need to do so.

#5 I.C. Norcom at #1 Hopewell (11-0), 2pm, Saturday, Merner Field: Last year, at this time, these two teams met, the defending state champions, at the time, expected to win. When the game ended, Norcom had stunned the Blue Devils 14-12. Hopewell still hasn't forgotten, in spite of exacting a measure of revenge with a 46-25 win back in Week 3. Every team left for Hopewell has to figure out what no one has been able to do so far: stop Treveyon Henderson. Frankly, a team that figures out how to hold him to, say, two touchdowns, would have to be considered successful. There's something special about this Hopewell team. They'll be sure to take it one step at a time because, with a win, their next step would be to either defeat an unbeaten York Falcons team, or a one-loss Phoebus team, neither an easy task. Norcom's defense needs a big day. Let's remember, they can score, losing to power Lake Taylor in a 57-56 track meet earlier in the season.

#5 Skyline (6-5) at #1 Goochland (10-1), 7pm: Another step in the region playoffs for Devin McCray and the Bulldogs. They would be heavily favored. Alex Fruth won't let his team look ahead to a possible region final with James Monroe, should they win the other semifinal. Look for Goochland to get out to an early lead and look to build it quickly. But the Hawks have scored at least 20 points in ten of eleven games, so 28 or even 35 points might be necessary for Goochland to move on.

#4 Greensville (8-3) at #1 Thomas Jefferson (9-2), 7pm, Huguenot HS: So, last week, the Vikings needed to beat Brunswick, who stunned Greensville in their regular season finale to qualify in Region 2A. That loss sent Greensville down from #2 to #4, so, they're not your normal #4 seed. It's another big test for head coach P.J. Adams' crew, who look to break the Thomas Jefferson record for most wins in a season. No Vikings team has ever won ten games in a season. The Vikings won nine games back in 1952. A heavy dose of Shamar Graham here could wear down Greensville. We'll see if that's the gameplan.

#3 Poquoson (7-4) at #2 King William (8-3), 7pm: It was King William, defeating then 8-1 King and Queen Central two weeks ago on closing night, who benefited from the Brunswick win over Greensville to zoom from #5 to #2 in the region, and thus, getting a home game here in the region semifinals. The Cavaliers have learned from victories, and certainly from defeats, too. Their loss to Benedictine, who went on to win the VISAA Division I state title, definitely showed them areas to improve upon. Now they get Poquoson, who ended John Marshall's season last week. Their best wins are over Essex, the top seed in Region 1A, and King & Queen. The Cavaliers have to be happy with where they are right now, after missing the playoffs in 2017 and falling in this round a year ago to Goochland, now in Region 3B.