It's finally here. The final week of the regular season brings with it cold weather (no surprise), teams fighting for playoff position, teams building for next season, and a lot of unanswered questions. CLICK HERE for the latest region standings and playoff implications.


CLICK HERE to listen LIVE to Tomato Bowl 61 and the first playoff projections on the RVA Sports Network Scoreboard Show after the game! Airtime Friday night is 6:30pm on 102.9 The Mater (102.9 FM/1430 AM) and on the TuneIn Radio App on "Radiall"!

#4 Varina vs. #1 Highland Springs, 1pm, Saturday, Hermitage High School: Another chapter will be written in this storied rivalry. For the Blue Devils, it's a chance to finally beat their biggest rivals for the first time since November 9, 2012. Varina has more weapons offensively than in recent years, and Highland Springs has had issues with turnovers in recent weeks. That will need to stop if the Springers look to extend their winning streak to 39 here, and, eventually, to 44 in order to win the Class 5 State Championship for the fifth straight season. In terms of quality of opponents, the playoffs start here for both teams; this is a great tune-up game.

#2 Hopewell at Matoaca, 7pm: It's simple for the 9-0 Blue Devils: win and you're the #1 seed in Region 3A regardless of what happens to fellow unbeaten York, as they finish with 0-9 Bruton. Treyveon Henderson is running away with Player of the Year honors, literally and figuratively. As for Matoaca, they must win to have hope to slide up to the #8 and final seed in Region 5B. They'll also need help. A J.R. Tucker upset of Hermitage in The Cat Bowl is necessary, and a Powhatan win over Huguenot helps, too. Henrico enters at 258 points knowing they will get a minimum of five points thanks to Hanover/Atlee, Tomato Bowl 61, and Highland Springs/Varina. Matoaca goes to 259 points with a victory, gets two points for the Meadowbrook/Prince George winner (Henrico gets two if Meadowbrook pulls the stunner), one point for Thomas Dale/Dinwiddie, two points if Colonial Heights beats Petersburg, one if the Crimson Wave win. Then there's The Cat Bowl.

Cosby at #3 Manchester, 7pm: The Lancers have a very outside shot at the top seed if Varina wins Saturday, so they'll want to win here. If Highland Springs wins, Manchester's next worry is making sure they outpoint Deep Run for the #2 seed. You'd rather have two home games ahead instead of one, and Deep Run will be a tough out for any opponent. The Titans try to end a three-game losing streak and enter the Region 6A playoffs on a very upbeat note. Cosby will make the postseason, win or lose. Where they'll be seeded will be determined Friday night. They are currently sixth.

Thomas Jefferson at #6 Deep Run, 7pm: The Hornik Bowl. Who would've thought, say, four years ago, that these two teams would meet with a combined record of 17-1. Deep Run head coach Chad Hornik changed the culture at Thomas Jefferson, then headed to Deep Run to do the same. Mission accomplished. The Wildcats looked fantastic in their 47-7 win over Glen Allen on last Friday's Game of The Week on 102.9 The Mater. They root for Cosby in hopes of grabbing the second seed. As for the Vikings, they've clinched #1 in Region 2A in their first season there. Win or lose, this team sharpens this team's resolve and focus as they get set to, they hope, host three games to try to capture the region championship.

#11 Clover Hill at #7 Monacan, 7:30pm: Very quietly, Monacan has risen through the ranks in Region 4B. Friday, with a win, they will clinch the top seed in the region, regardless of whether Louisa beats Albemarle to finish at 10-0. Monacan's only loss was to Manchester. As for Clover Hill, they need a win to guarantee the #5 seed in Region 5B. If they lose, #6 seed is in play, and so is the #7 seed should Douglas Freeman knock off Glen Allen. The Cavaliers, Royals and Rebels are all within one point in the region standings.

#9 Douglas Freeman at Glen Allen, 7pm: The Jaguars looked lost last week in their home loss to Deep Run which ended hopes for back to back playoff appearances. The Rebels rolled over a John Marshall that had defeated Glen Allen the week before. Douglas Freeman enters in seventh in Region 5B and, with a Monacan win over Clover Hill, the Rebels hope they could climb even higher. Douglas Freeman will be a tricky first round opponent come next Friday night. The storied career of Glen Allen's Devin Flowers comes to a close with this game as the all-time leading rusher in Central Region history.

The Patriots come off their bye week needing a win in Mechanicsville, a Thomas Dale win over Dinwiddie, and a King George win over Spotsylvania to have a chance to finish as the #4 seed and host a Region 4B first round game next week. Lee-Davis (2-7) leads the all-time series 30-29-1, but the Patriots seek their third straight victory in the storied series. Know the Confederates will use the entire playbook to try to end their disappointing season on a high note, trying to wrestle the Tomato Bowl trophy away from Patrick Henry.

Atlee at Hanover, 7pm: Disappointing seasons for both the Raiders and Hawks as this one-time red-hot rivalry is renewed Friday. It's the final game in an Atlee uniform for Tyler Warren, who will head to Penn State to play tight end next year.

Thomas Dale at Dinwiddie, 7pm: This is a big game for two teams already in their respective postseasons. The Knights need a win to ensure a first round home game and to at least have the #3 seed in Region 6A, while the Generals, currently sixth in Region 4B, need a win, and a loss by Spotsylvania to get a shot at the fourth seed and a home game next week. The biggest thing for both teams in this contest is to escape serious injury. You need all hands on deck when the postseason begins.

Powhatan at Huguenot, 7pm: The bottom of the Region 4B playoff race is nuts. Huguenot and Chancellor are tied for seventh, while King George and Powhatan are tied for ninth at about a half-point behind. If Chancellor and King George both lose, the winner of this game is likely in the playoffs. The loser is likely out. But it will be close, no matter what. For the Falcons and Indians, the playoffs are already here. 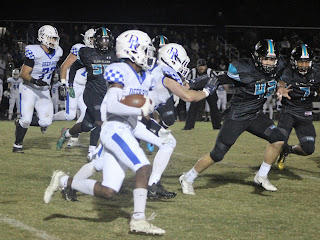 Posted by robwitham at 7:53 PM