Beginning his third season at the helm of the Washington Redskins, head coach Jay Gruden took to the podium for the first time at the Bon Secours Washington Redskins Training Center in 2016 Wednesday afternoon. Here are notable quotes from the presser.

About the mood of the team heading into 2016:

"We made major improvements last year, and we continue to expect our team to make those improvements. We had a great OTA session, we just want to build off what we did during the OTA's."

On the loss of Junior Galette to another achilles injury this week:

"We're upset, obviously, more so for him as an individual. Just watching him work, how hard he had been training coming back from the previous injury and the attitude that he gave, and the excitement he was going to bring to this football team, only to see it cut short with another achilles, it's, ah, devastating is a good word. Injuries are part of the game, and we have to rebound."

On preparing Kirk Cousins for the season with a long-term contract not completed:

"He's got to get his body ready, his mind ready to play a tough NFL season. He's got a year out of film, He's got to study other people. He's a great football player, he made great strides last year. We're all excited about it. He's got to continue that progress. The contract will take care of itself. We won't have any conversation about his future contract, any of that stuff. All we're going to focus on is this year, him getting better and being the best quarterback he can possibly be."

On the running back situation after Mike Jones:

"We've got Chris Thompson coming back, he's looked good. Mack Brown we had last year on the practice squad, Robert Kelley (Tulane) is a rookie free agent we picked up, Keith Marshall (Georgia) we're excited about. So, we have some guys who we're ready to look at." 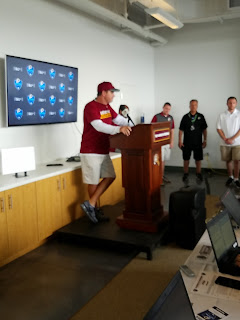 Camp officially opens to the public on Thursday, with walkthrough scheduled for 10:35am and full practice set for 3pm.

Posted by robwitham at 3:23 PM