Out of grave disappointment can come exhilarating victory.

It was only two years ago when a dominant Monacan Chiefs girls basketball team saw their 2014 season come to a sudden, jarring halt much earlier in the playoffs than they ever anticipated. That team's leader, Micaela Parson, graduated and headed to the University of Richmond, while a youth movement went into high gear in Smoketree.

A group of sophomores and freshmen who didn't know they weren't supposed to go all the way to the championship battled a senior-laden rival in Midlothian to grab the 2015 4A State Championship. This past March, the trail to a title felt more like a coronation.

The Chiefs lost just once the entire season, December 23rd to Highland Springs in the Times-Dispatch Invitational Tournament final, ironically held at the Siegel Center, where the Chiefs returned to claim their back-to-back titles.

And, for all the deserved attention to now the number one rising-senior recruit in America Megan Walker, it was Jaiden Morris who shined brightest on high school's biggest stage, scoring 33 first half points in the championship game against William Fleming as Monacan set a new record for most points scored in a girls basketball title game, winning 93-56.

Now with two titles in the trophy case at Monacan, the dynamic changes as we approach November and the 2016-17 season. Walker currently plans to announce her college choice before the season, eliminating one possible distraction. The Chiefs will certainly be favorites out of the gates for a third straight crown. Avoiding injury will certainly be a key, and, in our view, enjoying the ride rather than putting constant pressure on themselves will be, too.

For now, we savor the honor of watching a very special team: Monacan girls basketball, ranked #3 in our RVA Sports Network Top 10 Teams of 2015-16! 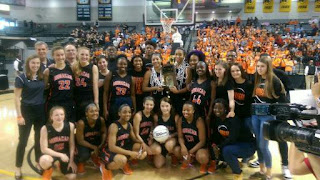 Posted by robwitham at 3:49 PM