For three consecutive years, the Skyhawks of L.C. Bird found the juggernaut that is Henrico basketball standing in their way in the game that meant either a berth to the 5A State Boys Basketball Tournament or the end of the season.

In 2014, a missed shot at the buzzer gave Henrico a 58-57 win in the 5A South Region Semifinals at Hermitage High School. A year later, same round, same location, the Skyhawks and Warriors battled into double overtime before Henrico pulled away late for a 111-99 victory, last year's #1 game in our RVA Sports Network Top Ten poll.

For 2016, the scene shifted to the mood lighting of Prince George High School, and with L.C. Bird losing to Varina in the Conference 12 Championship, the round shifted back to the quarterfinals. In the previous two years, a win wouldn't have clinched a state bid, but with the return of the State Quarterfinal round, this game was, again, for states or bust.

As totally expected, the teams battled back and forth, the Warriors out early, the Skyhawks climbing back late in the first quarter, making sure Henrico didn't get a prohibitive advantage. Down the stretch they came like two thoroughbreds destined for a photo finish at the Kentucky Derby, and, in the end, that's exactly what happened.

Mario Haskett launched a shot high into the air in the final seconds of regulation. It kissed the top of the backboard and found the twine. We had a dead heat after 32 minutes. Again, the Skyhawks and Warriors would go to overtime.

But it would only take one extra session this time, as Henrico went cold from the field, L.C. Bird hit key free throw after free throw, and the Skyhawks finally enjoyed the reality of slaying the dragon, defeating Henrico 81-73.

Congratulations to L.C. Bird basketball, winners of the #5 Game of The Year! 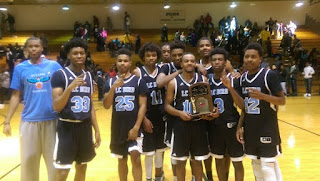 Posted by robwitham at 4:03 PM