There's something extra special about seizing the first state championship in a team sport for your high school.

And, after watching their male counterparts celebrate on the field at Robinson Secondary School in Fairfax in 2015, the Mills Godwin girls soccer team wanted that same feeling. But first, it would take survival in a series of defensive tests with rival Deep Run, then a state semifinal victory to give the Eagles the opportunity they'd worked for and dreamed about.

On a hot early afternoon in Fairfax, the Eagles fought back from a deficit, getting two Paige Franks penalty shot goals to take a lead on Tuscarora, who bounced back to force overtime. In extra time, Franks finished her hat trick for history, and Mills Godwin girls soccer could finally call themselves state champions.

Congratulations to Mills Godwin, our #7 team for the 2015-16 season! (Photo courtesy of Bob Lanum) 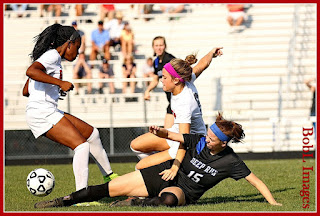 Posted by robwitham at 4:00 PM