There was an unmistakable sense of deja vu on 5A State Softball Championship weekend for the defending champion Atlee Raiders.

Play at Robinson Secondary School in Fairfax? Check.
Face a county rival in the 5A State Semifinals? Check.
Face Hickory for the state championship? Check.

Checkmate came on a 4-6-3 double play that caromed off the glove of Peyton St. George straight to Jordan Durbin, who flipped to Casey Barrett sweeping across second base, taking the toss and firing it to Malorie Fodill at first to set off the celebration as, again, the Raiders shut out the Hawks, this time 5-0 for their second straight 5A State Championship.

Their road to Fairfax, however, was different in 2016 than 2015. They were the hunted, rather than the hunter. Atlee had an entire new coaching staff following the retirement of former head coach John Earley and longtime assistant, and 2002 state champion head coach Becky Levy.

They lost their first game on April 8th at home in a 2-0, nine-inning battle with rival Lee-Davis, then returned the favor, handing the Confederates their first loss three Fridays later with a comeback 3-2 win at Lee-Davis. Atlee returned atop our RVA Sports Network Top 10 Poll, and they never left.

They were handling postseason opponents well until Halifax came to town for the 5A North Region Championship, wanting revenge for a 1-0 loss in the Conference 16 finals. They got it, as the Raiders struggled mightily in a 6-0 loss. It was a wake-up call for the defending champions.

In the state semis, they used power and pitching to overwhelm red-hot Lee-Davis 7-1, then asserted themselves in the championship game Saturday morning against Hickory.

Listen to the 5A State Championship game at the YouTube link below! 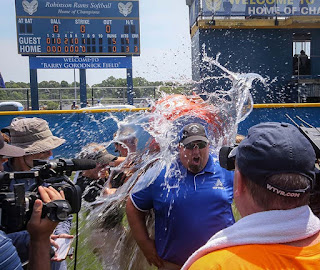 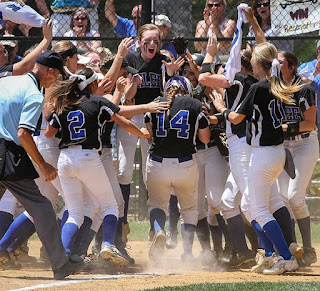 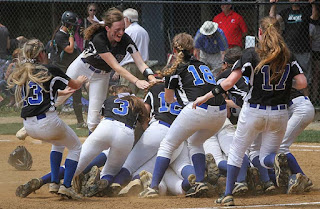 Posted by robwitham at 3:32 PM