When it is considered a disappointing season when you make it to a state tournament and lose in the semifinals, you know you have built a powerhouse program.

That was exactly where Hanover Baseball was in June, 2015, not at all content to see rival Glen Allen claim the 4A State Championship. So what did the Hawks do? They regrouped, some players healed from everything from minor injuries to Tommy John surgery, and, come March, began another surge with the sole goal being hoisting the trophy in Lynchburg.

What did Hanover accomplish in 2016? They began 4-0, lost what would be for the only time at the Forest Acres Classic over spring break in South Carolina, finished unbeaten in the Commonwealth of Virginia, and finished the season on a 20-game winning streak.

The regular season featured matchups with top teams in South Carolina, Deep Run, and comeback wins over two rivals in Atlee and Lee-Davis. The Conference 20 Tournament was a coronation with two huge victories. The Hawks survived a gutsy attempt from a feisty Louisa Lions squad in the 4A East Region Tournament opener, then broke open a game late to eliminate Lafayette and clinch a return to Charlottesville.

Less than twelve hours after the Lafayette win at home, Hanover hit I-64 to Williamsburg, disposed of Jamestown 11-0, and returned to Richmond in time for the prom. The following week, a return to Liberty University, first with a semifinal win over Kettle Run, then what looked to be for five innings an easy title win over Liberty Christian Academy.

But the final two innings of the title tilt were nothing less than a wild classic, making the 4A State Championship the #2 Game of 2015-16, as Hanover saw a 7-1 lead disappear in the sixth inning, answered with six runs of their own for a 13-9 lead after the 74-minute sixth, then held on for a 13-12 win.

The senior class for Hanover (seen in the first picture below) never played a season without, at worst, making a trip to the state tournament. A fair comparison would be the New England Patriots run from 2001-2004 with three Super Bowl titles in four seasons.. They have left a legacy which will be long remembered, and difficult to duplicate.

Congratulations to the Hanover Hawks baseball team, our #1 Team of 2015-16! 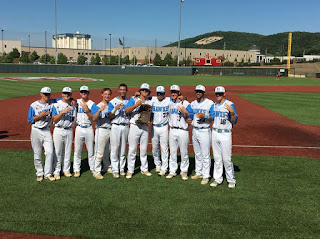 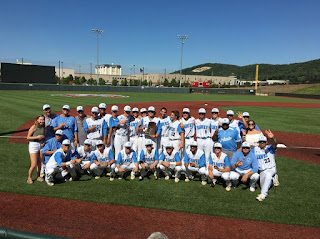 Posted by robwitham at 3:39 PM