The party-crashing Chiefs begin our year-end countdown of the top teams of the 2015-16 high school sports season in the RVA.

While fans knew all about the Monacan girls team, their male counterparts flew very low under the radar during the regular season, entering the Conference 20 Tournament essentially in a three-team race for two spots in the 4A East Region Championship.

The Chiefs, after eliminating Hanover in the Conference 20 semifinals, went to Dinwiddie and claimed the title with a 61-59 win over the Generals. A first round 4A East Region win over Courtland clinched a berth in the 4A State Tournament, but then uncertainty crept in, as a pair of losses to finish regionals put the Chiefs as the #4 seed, having to battle the 4A West Region champions in the 4A State Quarterfinals.

The magic really began in earnest at James Madison University, as the Chiefs shocked Loudoun Valley 57-55, earning Monacan a trip to the Siegel Center in the 4A State Semifinal. The Chiefs were tied George Washington at 63, with the ball in the final seconds. It would be Wallace Washington as the hero, hitting the game-winning drive with a second to go to send Monacan to the state final, where they would knock off Lake Taylor for the championship.

Congratulations to Monacan Chiefs boys basketball, 4A State Champions and #10 on our year-end countdown! 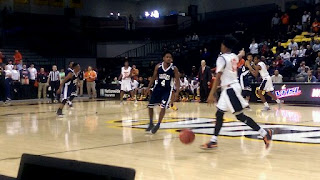 Posted by robwitham at 2:42 PM