This is the story of Nina Sorkin and the five newcomers. Sorkin understood the disappointment of reaching the brink of a state team tournament berth in girls tennis, only to see her's school's rival, Mills Godwin, take it away, as they had done year after year after year.

But in 2016, Sorkin came armed with a group of five wide-eyed freshmen who had heard of the Eagle juggernaut, but wasn't fazed by it. When all was said and done in the 5A South Region Semifinals, Deep Run had defeated Mills Godwin 5-2, ending Godwin's reign and launching the Wildcats into the 5A State Tournament, which they won, defeating George Marshall in the semifinals before beating Thomas Jefferson S&T of Alexandria in the title match, both by 5-0 scores. 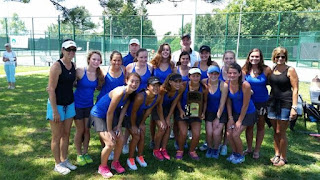 Posted by robwitham at 3:58 PM