After five innings in the 4A State Baseball Championship game, there was no hint, no indication to the assembled fans at Liberty University's baseball stadium, that they were about to actually witness a "classic".

The Hanover Hawks seemed just moments, and officially, six defensive outs, from their third state crown in four years, leading Liberty Christian Academy 7-1. But the top of the sixth signaled the end of part one, and the start of a whirlwind 74 minutes that saw a huge lead vanish, but also saw the fortitude and grit of a team that hadn't lost in the Commonwealth of Virginia, a team that went from the brink of a title to the brink of watching a dream, in their grasp, slip away.

In the top of the sixth inning, the Bulldogs, against the cream of Hanover's pitching crop, chipped away and away at the Hawk lead, and, before the third out, Liberty Christian had taken a 9-7 lead. The momentum had swept to the other side. But though Hanover had enjoyed its fair share of comfortable victories during the season, they also had fought adversity, specifically in two comeback wins over Hanover County rivals Lee-Davis and Atlee.

They also wanted no part of seeing the script repeat itself regarding their lone loss of the season, where Hanover saw a mid-game lead wilt away in a 16-8 defeat at the Forest Acres Classic over spring break in South Carolina. The Hawks responded, striking for six runs of their own in the bottom of the sixth, ending the marathon inning back in front at 13-9.

The Hawks turned to senior Tyler Morgan, who had returned from Tommy John surgery that caused him to miss the 2015 season, to finish the job. But there was one more fight in the Bulldogs, who scored three runs and had the tying run at third base with two outs. But Morgan reared back and fired strike three for the final out, and the Hanover Hawks could breathe a sigh of relief as they raced onto the field for the traditional dogpile to celebrate not a coronation, but a come-from-behind 13-12 win.

Congratulations to Hanover Hawks baseball, winners of the #2 Game of 2015-16! 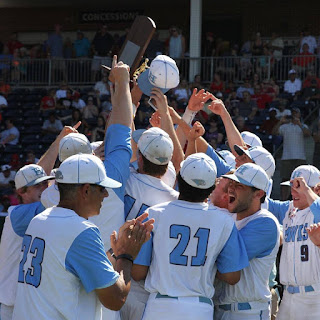 Posted by robwitham at 4:14 PM