As heard live on the RVA Sports Network High School Football Game of the Week on WHAN Radio, it seemed like the homestanding Hanover Hawks would have their way with their current biggest rival, the Atlee Raiders, as Hanover went to halftime enjoying a 25-6 lead, the Raiders showing no signs of their usually potent offense.

That is, until the first play of the second half, when Rasharrd Harris flipped the football to J.J. Givens, and let the future North Carolina State wideout do the rest, going 67 yards to begin a 31-point third quarter explosion as the Raiders came back on the road to stun the Hawks 44-40.

Hanover didn't roll over despite Atlee's third quarter for the ages, as quarterback Marcus Bazala led a long drive early in the fourth quarter to retake the lead at 40-37, but the Raiders took the lead for good after recovering a surprise Hanover onside kick at midfield, scoring five plays later as A.J. Zollar ran to paydirt from three yards out for the winning score.

Both teams made their respective playoffs, with Atlee winning one, Hanover winning two games. But September 25, 2015 will forever be known as one of the crazier chapters in the 13-year rivalry between the closest geographical rivals in Hanover County. (Photo courtesy of Nick Liberante) 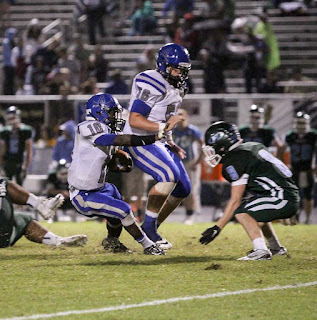 Posted by robwitham at 3:40 PM