The streak was over.

Up to this point in the high school boys basketball season, the wheel of fortune had created two of three possible matchups between some of the biggest teams in the RVA Sports Network Top 10: Henrico, Deep Run and St. Christopher's, with L.C. Bird quietly biding their time across the river knowing their turn would likely come in the playoffs.

First, St. Christopher's knocked off Deep Run for the Times-Dispatch Invitational Tournament Championship just before Christmas. Then, a week later, it was the showdown of future Spiders as the Saints' Nic Sherod and Henrico's De'Monte Buckingham squared off in the Henrico Holiday Hoops Tournament Championship heard live on RVA Sports Network, won by the homestanding Warriors.

Thus, the next two weeks were filled with buzz about Deep Run's impending trip to Henrico for a regular season matchup on January 13th. And, live on RVA Sports Network, Henrico jumped to an early eight-point lead after one quarter, and still led by seven after three.

But something happened in the fourth quarter that hadn't occurred in a long time. Henrico was dominated by their opponent. Part of their downfall was outside shooting that failed them, but credit must be given to the Wildcats, who came so close to knocking off both eventual 5A State Champion Henrico in the 2015 Conference 11 Championship, then L.C. Bird in the 2015 5A South Region Quarterfinals, for producing a shut-down final eight minutes that led them to a 65-60 road win, bringing Henrico's storied 33-game winning streak to a close. 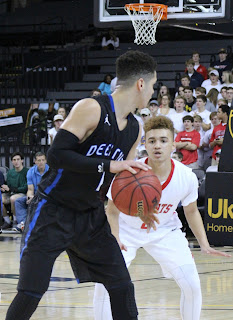